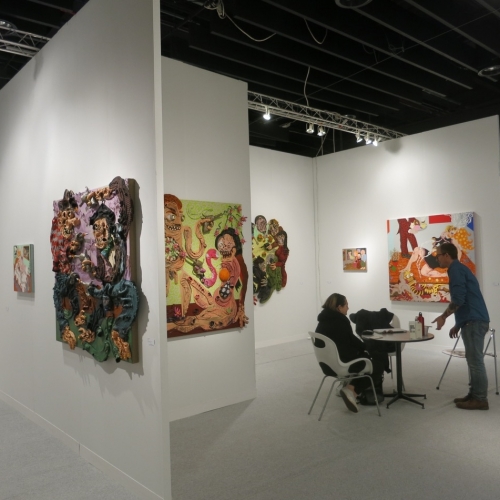 STUX Gallery is pleased to announce the opening of Aaron Johnsonʼs solo show at VOLTA 2016, an exhibition of selected “sock” and “reverse” paintings from 2014 to 2016.

Johnsonʼs highly detailed reverse-painted works are obsessively executed with Indian-miniaturesque precision while his earthy sock pieces evoke the grit of the expressionist stroke. Johnsonʼs translucent-skinned figures are cavalier in their violence and sex, gleefully facing the temporality of life and death. These sock caricatures are saucy, aggressive, puffed-up and confrontational; they wield pistols and feast, laughing as bullets fly.

This show offers two incarnations of Johnsonʼs paintings born in symbiosis from opposite sides of the picture plane. His signature “reverse-painted acrylic polymer peel” works are executed completely in reverse on clear plastic to start out with. Beginning with the smallest details, Johnson increasingly builds upon the previous layers until he reaches his backgrounds. He ultimately peels the painting off the plastic and mounts it on the stretcher. These deeply flat works are juxtaposed to the highly protrusive “sock paintings,” created with donated socks from people of all walks of life, reviving the meaning of the “brush stroke” and bordering on sculptural in their reach towards the viewer.

Uniting these two distinct physicalities is Johnsonʼs inimitable style, a painterly madness flowing forward from his influences of Goya, Peter Saul, Picasso, Ensor, Llyn Foulkes, and the Hairy Who. Johnsonʼs vision is singular, and his paintings are a delight of garish yet harmonious color and a lyrical flow of sinister beauty.